It’s a classic pale ale brewed with 100% Golden Promise malt – a heritage malt that gives a balanced, clean and full-bodied finish. They do say ‘the old ones are the best’ and with this heritage malt, we’d have to agree. The Golden Promise is neatly complemented with light, fruity and floral hops.

Available from June 2019, begin your own journey through the history books by sampling Ducie Ale at one of our participating pubs. 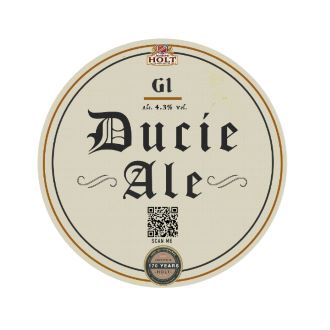 The Story Behind Ducie Ale

Ducie Ale pays homage to the formative years of the Joseph Holt brewery, way back in the mid-1800s.

After time spent during the 1840s working as a carter at the Strangeways Brewery, Joseph Holt, with his recently wedded wife Catherine Parry, moved into a small house in the centre of Manchester in 1849. It’s here where the wheels were put in motion to fulfil his plans and start a brewing career.

With the financial backing and business acumen of Catherine, Joseph was able to rent a premises in Oak Street, now in the popular Northern Quarter, where he set up his first beer making facility.

After six years at the Oak Street microbrewery and with business going well, Joseph took his beer brewing capabilities and expanded operations over to Ducie Bridge Brewery just before the Christmas of 1855. Located on York Street now known as Cheetham Hill Road, Ducie Bridge was already a functioning brewery and offered the Holts an increased brewing capacity. The owners at the time, William Smalley and Joseph Evans, were expanding themselves and moved over to the Chorlton Road Brewery in Hulme.

The new brewery offered the Holts much more space, enabling the whole family – Joseph, Catherine and young son Edward – to move across and into the caretaker’s cottage. The 784 square yard premises also came with a brick beerhouse, horse stables and space for drays to be parked, all situated around a small yard.

The brewery itself came with a 12-barrel pan, mash tun, two coolers, a cooper pump, extensive cellars and a small warehouse.

Whilst at the Oak Street brewery, Joseph just brewed ale. However, with a little more scope at Ducie Bridge he expanded his product range to include porter, a predecessor of today’s mild and stout, where it became a firm favourite with locals. As more beer was being brewed, sold and enjoyed, the Holts would be on the move again by 1860.

It’s clear that the Ducie Bridge Brewery played a pivotal role during the early years of the fledgling company, helping Joseph set firm foundations for what would be the company we know today.

Other landmark events during the Ducie Bridge Brewery Years

·  1858 – Emmeline Pankhurst, leader of the suffragette movement, born in Moss Side, Manchester.

·  1859 – Charles Darwin published ‘On the Origin of Species’, revolutionising the field of biology with its theory of evolution.

·  1859 – Big Ben at the Palace of Westminster chimed for the very first time.

I want to see all the generation ales

Take me to Paterson's