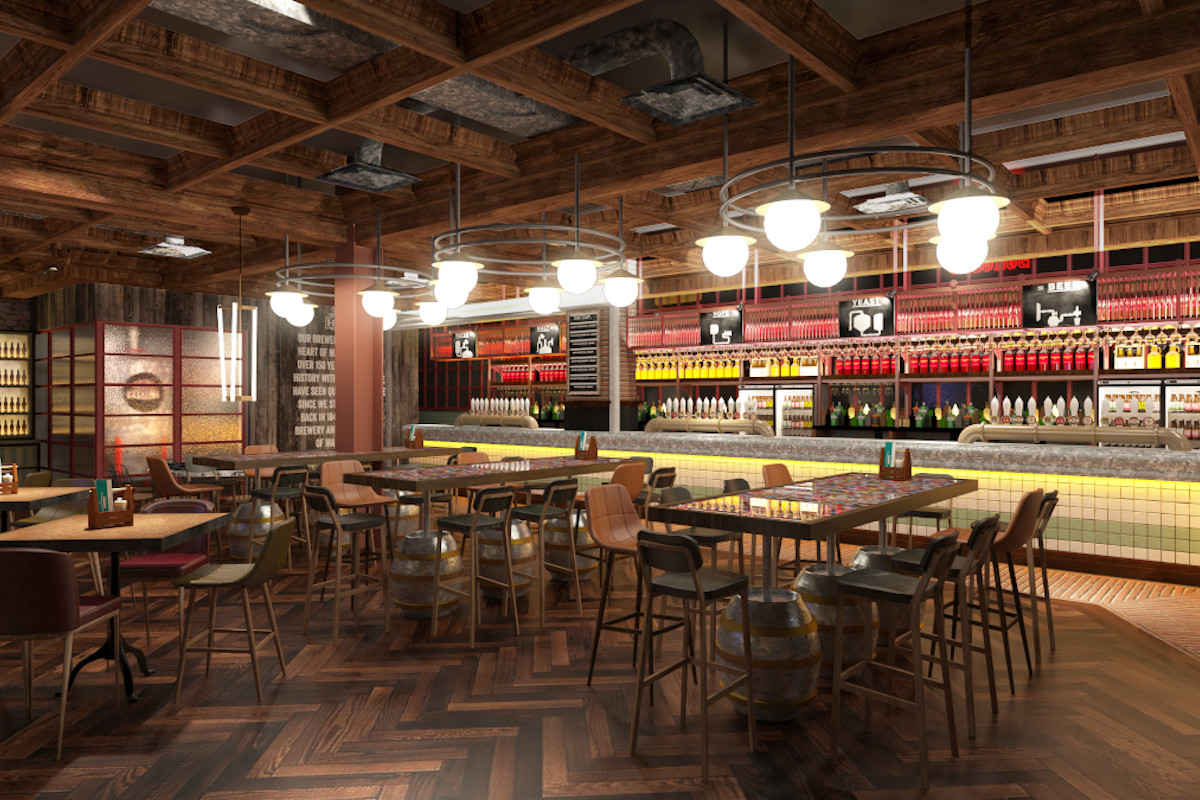 Passengers waiting for their flight at Manchester’s new ‘super terminal’ will soon be able to enjoy a pint produced on site – thanks to the opening of the UK’s first ever airport microbrewery.

The Bridgewater Exchange pub – which is being opened by Joseph Holt in conjunction with The Restaurant Group (TRG) – will also be the venue for Europe’s first ‘airside-only microbrewery’.

Located behind a glazed wall in full view of drinkers, the microbrewery will provide an insight into how Joseph Holt make their award-winning beer and give passengers an exciting and enthralling view into the nations favourite drink.

A special airport brew will also be created to celebrate the partnership. And although the recipe for the airport ale is yet to be finalised, the beer itself is likely be honey-based as a nod to the city’s iconic symbol – the Manchester bee.

The Bridgewater Exchange with in-house microbrewery

The microbrewery, which opens next Spring, will comprise everything needed to produce beer, explains Richard Kershaw, Chief Executive and fifth generation of the Joseph Holt family. It will simply be on a much smaller scale.

He added: “We’re very proud of the ales and lagers we already produce and to go into such a development with a microbrewery on site will really show our passion for brewing beer. As the capacity of terminal two increases so too will the number of people from all over the world who can enjoy a taste of our award-winning ales and lagers.”

Richard continued, “Manchester has always been at the forefront of development. This new super terminal will create an experience for passengers from all over the world, being able to enjoy a pint as well as seeing beer being brewed right before their eyes is truly remarkable and one which we are very proud to be leading.”

Manchester’s new ‘super terminal – an extension of Terminal Two – aims to reflect the city’s thriving food and drink scene with other coffee and eateries.

The £1 billion project which will double the size of Terminal Two aims to slash off-peak security queues, double airport jobs and add 10m passengers over the next ten years. Airport bosses say they will be able to handle around 35m passengers a year when the new terminal is opened.

Joseph Holt itself is currently celebrating its 170th anniversary and the opening of the new microbrewery represents its 127th outlet.

Nick Ayerst, Managing Director of The Restaurant Group said that the aim of his company was to introduce an iconic range of local, innovative and truly unique brands to the new development and offer Manchester Airports passengers the ultimate food and beverage experiences before and after their flights.

“We couldn’t be more excited that Manchester Airport Group shared our vision and we look forward to unveiling our brand line up and welcoming guests to some of the most exciting airport catering in the world.”

Manchester Airport Chief Executive Andrew Cowan said: “We have worked hard to identify partners that represent the strength and depth of the region’s food and drink scene and it is great to be working with so many brands that started life here in the North and have grown to become household names.”